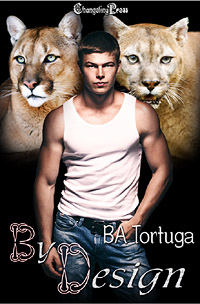 Part of the Southern Cats series:

When Robin heads to North Carolina with his boss to help design and build a new conference center, he has a bunch of surprises in store for him. The building site is in the middle of nowhere, his boss is being weirder than usual, and he meets not one, but two of the hottest men he's ever seen in his life. If he can just get his boss Terry to leave him alone with them, Robin knows Casey and Travis could rock his world.

Casey and Travis might play, but they've never thought of mating with a third man. Their immediate need for Robin is something they don't question, though. What they do want to know is how Robin can possibly be unaware he's a cat shifter. Can they help Robin find the other half of himself and convince him he's what's missing in their relationship at the same time?

Publisher's Note: The novel By Design by BA Tortuga was available briefly from another house.