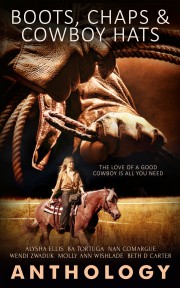 ‘The Cowboy Takeover’ by Alysha Ellis

Some things are worth more than money.

Maddie is on her way to Harwood Downs Cattle Station to evict cowboy Kyson Brown from the land he loves. The property’s absentee owner has leased it to an open-cut mining company.

Kyson refuses to give in without a fight, and he enlists surveyor Connor Benton to help save Harwood Downs from environmental destruction.

When Maddie is stranded for a few days, Kyson and Connor show her a world of new experiences, both in bed and on the lush soil of Harwood Downs.

Maddie’s duty to her employer is clear, but how can she give up the best sexual experience of her life?

‘Tied and Taken’ by BA Tortuga

Ainsley Preacher’s gotten used to being more than Daddy’s little girl and once she gets back to the Texas rodeo circuit, her ex, Kase, intends to find out exactly what that means.

When Ainsley broke up with him a while back, bronc rider Kase just figured it was because he was too wild for that straight-laced girl. Rodeo royalty, Ainsley rarely let her hair down with the other riders, and she let way more than her hair loose with Kase. She ran far enough that Kase couldn’t catch her, but when she returns to the Texas circuit for a few events, Kase notices something new about his ex, and he has to know more.

Ainsley left because she thought Kase had done her wrong, but she’s never gotten over her feelings for him, or what he could do to her body. In fact, she got a tattoo to remember him by, one that she can’t take a chance on anyone in Texas knowing about. So when Kase tells her he wants a peek at her tattoo, and a chance to get back into her life, Ainsley has to hold firm. She doesn’t have the time to end up tied and taken again, right?

‘Three to Feud’ by Nan Comargue

An old family feud cost Grace the love of two cowboys. Now that she’s back in town, she’s all business…but Josh and Drake are all about pleasure.

Adopted as a baby, Grace figured her biological family must have been pretty messed up but they couldn’t possibly have compared to the Alberta family she ended up with. For one thing, none of the family speaks to each other, despite living next door for generations. Once, Grace and her adopted cousins had hopes of ending the feud, but when she returns home, she finds the two men as distant from each other as the original brothers who started the feud all those years ago.

Grace was sexually involved with both good-natured Josh and dark, quiet Drake Walker years ago, before she left to go to university, but she’s only visiting now to arrange for an appraisal of her portion of the property. Her boyfriend Adam is offering more of a commitment than either of the two of them seemed willing to when she was younger, with each Walker rejecting her for his own reason.

When Josh shows up at her doorstep with beer and pizza on the first night, it’s as if the intervening years hadn’t existed. Grace soon realizes that the feud that meant so much to him when they were all younger no longer matters all that much. His visit leaves her with new hope.

Later it’s Drake’s turn to visit. Though he once thought the twelve-year age gap between them was too large to overcome, time has thankfully solved most of that problem, with Grace and Drake meeting on equal footing now—unless you count being taken from behind on the kitchen table.

At the end of her visit, Grace faces a choice between the two men, a choice that will no doubt rekindle the old feud. But is there a way for the three of them together to come up with a solution?

‘Between Us’ by Wendi Zwaduk

Channon Kennedy planned to come home, but she never expected to find herself in the arms of the two men she’s fantasized over since high school. Back then, Shaun and Brian didn’t seem interested. Now, she’s older, wiser and has nothing to lose. If the men of her dreams want her, who is she to resist?

Home is where the healing is.

Summer Quinn has been away from the Moonglow Dude Ranch a long time. Now she’s coming home. But is she ready for what awaits her?

Summer’s been hurt, her confidence wounded, her trust destroyed, and she has sworn never to fall for a man again. Trouble is, she’s still in love with the one man she thought would never want her.

Barrett Thorne had to quit the rodeo circuit because of injury. One more fall could be fatal. He’s certain he’s no longer desirable, especially since his wife left him for another cowboy. All he wants is manual labor to wear him out and a place to lay his head.

But beneath the Pocono moon, can Summer begin to heal her cowboy?

On the hunt for a criminal, Everett will find the love he walked away from.

Amanda, Cooper and Everett were the best of friends, and after an intimate encounter at Cadence Falls, Amanda believed they’d be together forever. But when Everett leaves without a word, her heart breaks and she pulls away from Cooper too.

Years later, a dangerous felon has escaped from prison. When he disappears into the vast Montana mountains, the US Marshalls come to town and they bring along a Shadow Wolf tracker—Everett. For Everett, it’s the one place he really doesn’t wish to return to, since he knows the long-lost love of his life, Amanda, still lives there with his once best friend, Cooper.

For Cooper, Everett’s appearance brings up remembered love and pain, creating more discord between the three of them. When they’re forced to work together to help capture the criminal, will they be able to get over past hurts and reconcile, or will they forget about their time at Cadence Falls forever?