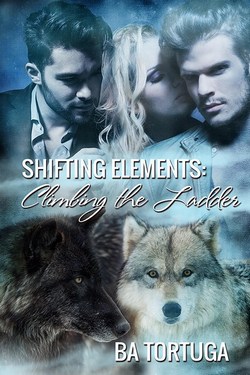 Part of the Shifting Elements series:

Mesa has a lot on his plate since he became his pack’s Alpha. With another clan on the brink of self-destruction, he knows he has too much to take care of to go running off, but he also knows what he needs to do in order to run his pack, and that’s go get his mate.

Kody left Mesa years ago, knowing they could never be together the way Kody really wanted. Making a life for himself seemed like the best idea, and when he found Samantha, he knew he’d found the woman he wanted to marry. Kody never forgot Mesa, but it still comes as a shock when the big, growly man shows up on his Los Angeles doorstep.

Between Sammy’s rage at what she sees as Kody’s betrayal, pack politics hitting the boiling point and the amazing chemistry between the three of them, Kody, Mesa and Samantha have their work cut out for them. Can they climb the ladder to love?