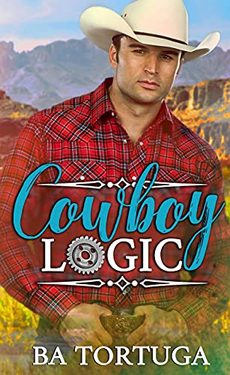 When Anderson “Logic” Whitehead gets a call from his sister that she’s in a dangerous situation, he leaves his California home to head back to Texas for the first time since high school. He’s a different man now, a well-known author and creator, as well as out and proud, so he’s not about to let anyone intimidate him, whether his sister’s stalker or an old nemesis from his bad old days.

Cowboy Jericho Yeager has his land, his kids, and a lot of conflicting emotions about his hometown. When his neighbor Bailey starts having trouble with what his daughter calls a “bad man” Jericho mounts up to help, but he doesn’t find a stalker, he finds Logic, who used to be a skinny, pimply kid. Now Logic is everything Jericho could ever want, but he knows he can’t just grasp the brass ring.

Guys like Logic don’t fall for men like Jericho, and relationships that begin under high stress never last. At least that’s what Jericho tells himself. Logic is used to going after what he wants, so he’s wiling to ask Jericho to give him a try, but even he’s not sure he can get past all of their history with each other, and with their deep East Texas hometown.