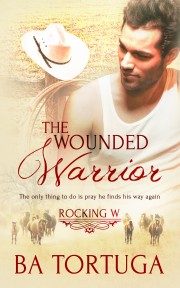 Part of the Rocking W series:

When Luke’s lost everything, the only thing to do is head back home to the ranch and pray that he finds his way again.

When Navy SEAL Luke Blanchard comes back to Northeast Texas after a devastating injury, he feels like the whole world has gone dark. In a wheelchair and feeling worthless, Luke has no idea what to do, even as his twin brother Matt is determined to lift him up and help him heal.

Rory McConnell is a local prodigy, a real estate lawyer with a plan to buy up land before his bitter rival can collect it. When the Blanchard ranch goes into the red, he offers to buy out the debt. Luke backs his brother instead, but he doesn’t believe for a minute that Rory is a bad guy. No one that sexy and fun can be, right?

As Luke claws his way out of depression with a crazy idea to run a therapy ranch, he and Rory start to explore the need growing between them. Will Rory’s need for revenge against a man who damaged him forever come between them, or will it be the force which brings these two wounded men together for good?