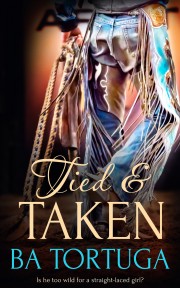 Ainsley Preacher’s gotten used to being more than Daddy’s little girl and once she gets back to the Texas rodeo circuit, her ex, Kase, intends to find out exactly what that means.

When Ainsley broke up with him a while back, bronc rider Kase just figured it was because he was too wild for that straight-laced girl. Rodeo royalty, Ainsley rarely let her hair down with the other riders, and she let way more than her hair loose with Kase. She ran far enough that Kase couldn’t catch her, but when she returns to the Texas circuit for a few events, Kase notices something new about his ex, and he has to know more.

Ainsley left because she thought Kase had done her wrong, but she’s never gotten over her feelings for him, or what he could do to her body. In fact, she got a tattoo to remember him by, one that she can’t take a chance on anyone in Texas knowing about. So when Kase tells her he wants a peek at her tattoo, and a chance to get back into her life, Ainsley has to hold firm. She doesn’t have the time to end up tied and taken again, right?

Publisher's Note: This book has previously been released as part of the Boots, Chaps and Cowboy Hats anthology with Totally Bound Publishing.