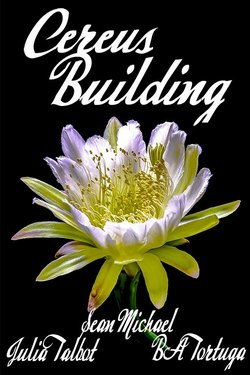 Part of the Cereus series:

What happens when a besieged and rather small dragon comes to a vampire and says, “I need your help”? Or when that vampire comes to a werewolf and says, “I have a job for you”? The vampire goes and builds a resort for things that go bump in the night, deep in the Cascade Mountains. Riding the wave of Julia Talbot’s Bloodrose series, the multi-author Cereus: The Building features paranormal romance Sean Michael, Julia Talbot and BA Tortuga.

Julia Talbot’s It’s Elemental features construction contractor Chayton, a werewolf who thinks demon decorator Kenny is a little fussy, and a lot hot. They argue about everything from feng shui to sex. Will they be able to resolve their differences?

The Third Course, by BA Tortuga, tells the story of Marco and Stephan, werecats, pridemates, and chefs who meet their match in head-bartender, Faelan, who just happens to be a growly, sexy Top.

Finally, Sean Michael’s Smoke and Gold follows the head dominant of the club, Zee, who’s dealing with trying to get his playrooms just so and trying to figure out maddening dragon, Daniel, at the same time. Who can resist loving a dragon?

This is a previously published work. The publisher has changed.