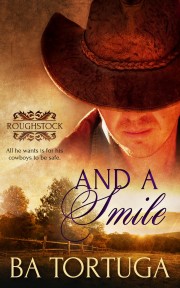 All Coke Pharris wants is for his cowboys to be safe—all of them. When rodeo clown, Dillon, sets to prove that there’s more to the bullfighter, people could get hurt.

It’s Coke Pharris’ job to save bull riders from bulls, and he takes his work very seriously. Which is why he’s devastated when one of his favorite riders gets hurt, and he’s determined to help the young man ride again. Dillon Walsh is the arena entertainer for the bull riding tour, and he wants to help. He also wants Coke, has been admiring the man for a long time. He hasn’t made a move on Coke for fear of messing up their friendship, but when he finds out Coke might feel the same way, Dillon has to try to win Coke over.

Coke thinks he’s too old for Dillon, too beat up and scarred, but he can’t resist when Dillon finally makes a play for him. Dillon is like a wet dream for Coke, and the two of them have a great time getting to know each other better, at least until the danger of their job threatens to come between them. Will Dillon and Coke be able to help their friend and weather the problems that blow their way?