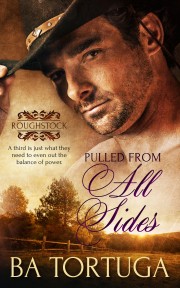 Balta is all fire and fury, Joa is his haven. What happens when Raul becomes their third?

Joa is an anomaly on the bullriding circuit—he’s Brazilian but grew up in Texas, so he’s not sure where he fits in. Champion Brazilian rider Balta knows just where he wants Joa to be, both in his life and in his bed.

Raul is new to the bullriding circuit and needs their help learning the ropes. From the start, Raul knows that Joa belongs with Balta, but he also knows that Balta’s career is on its way down and the world is ripe for another champion from Brazil.

When Balta decides that Raul is just what he and Joa need to even out the balance of power, they have to find common ground—professionally, publicly and, most importantly, personally.

Publisher's Note: This book has been previously released elsewhere. It has been revised and re-edited for re-release with Pride Publishing.